The Ultimate Guide to FinTech in Africa

The emergence of FinTech has brought with it both challenges and solutions. A continent like Africa, in particular, has presented a curious case in this regard. A 2018 World Bank research revealed that 66 percent of Sub-Saharan Africans are unbanked. Consequently, financial inclusion has been a major concern. And this is where the power of FinTech came in. The FinTech revolution in Africa in recent years has helped to create opportunities for such financial inclusion as mobile banking services and online wallets allowed many to become part of the financial systems.

FinTech in Africa – The Story so Far

As innovators and entrepreneurs attempt to plug the gaps in the traditional financial and banking systems in Africa, FinTech startups have mushroomed. Tellimer reports that there are more than 400 active fintech companies across the African continent, nearly 80 percent of which are homegrown. The report also reveals that payments have been the most dominant service domain, owing to a lack of financial inclusion in the formal banking system. Across West Africa, the mobile money sector reach is 13 times greater than local banks.

M-Pesa has been particularly successful and provides an enlightening case study in the evolving dynamics of the FinTech sector. It was started as a service to transfer funds, pay and collect bills and loan payments, etc. – all without the use of cash. The response was phenomenal. By 2016, Kenya had more than 25 million M-Pesa users. Such was the impact that nearly 2 percent of Kenyan households were lifted out of extreme poverty owing to mobile money services.

Consequently, the FinTech sector has been driving growth in the continent and is becoming an important contributor to the GDP.

While there are regional variations within the African continent, payment services have largely constituted the most successful FinTech products. Offerings such as B2B tech support, lending, investments, and insurtech have also gained rapid growth in their customer base.

In terms of regional distribution, Nigeria has made giant leaps and is set to become the ‘FinTech capital of Africa’. FDI inflows to Nigeria were nearly 2 billion USD in 2018, and FinTech has been an important source of revenue. But with a large unbanked population still, there is a lot of room for market penetration and ensuring greater financial inclusion.

Blockchain technology has been a relatively lesser explored aspect here. Even so, there are platforms that have begun to adopt distributed ledgers to tap the multitude of benefits that come with this technology. 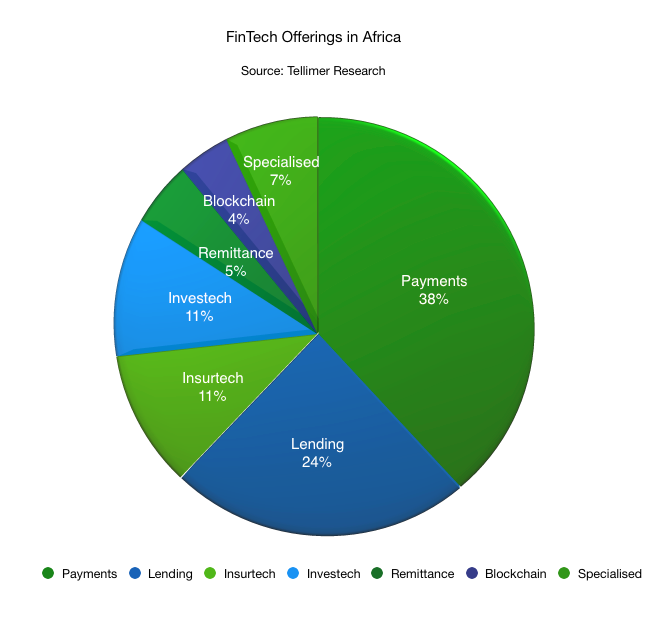 AFRICINVEST, in its report ‘Africa and the Global FinTech Revolution’, has shared insights into the trends and trajectories in the African FinTech sector. Let us have a look at the three major trends that have been observed,

Mobile Network operators in Africa have been aggressive in entering the financial sector. There have been partnerships with banks, microfinance companies, and insurance companies. This has resulted in the easy availability of nano-loans, insurance products, and various other services.

The convergence of disruptors with banks has helped in the management of systemic risks, creating synergies, and thereby providing a secure, enhanced experience to consumers.

Apart from lowering costs, the dematerialization of financial services has also made transactions more convenient. Consequently, even consumers with access to formal banking have preferred to make the shift to dematerialized means to access these services more efficiently.

In 2011, internet penetration in Africa was approximately 13.5 percent. But in a matter of eight years, the rate had reached a promising 35.9 percent. The internet revolution, coupled with emerging technologies like big data, artificial intelligence, and the blockchain, is set to create a convergence wherein lies the key to creating a robust, secure, far-reaching, and inclusive FinTech sector that would have the potential to revolutionize Africa’s economy. It’s why we at Salt are excited about the continent, and the potential it holds!

FinTech and Banks: Partners in Change

How Fintech is Changing the Global Remittance Space